Will the „G-d blessed” Criminals realize their OT Plan of World Dominion?

Organizers of the approaching “Mut zur Ethik” annual Congress in Switzerland have asked me: (…) We would rather ask you to contribute to the topic „What to do in times of upheaval: Can the New Silk Road project help prevent wars?“

After my return from Dolomites, where I climbed (ferrata this time assisted) the Mt Civetta (3220m), at my computer screen I found two answers to the first part of the above demand. The first one consisted of (living at present in Japan) Beniamin Fulford prophecy of August 21: 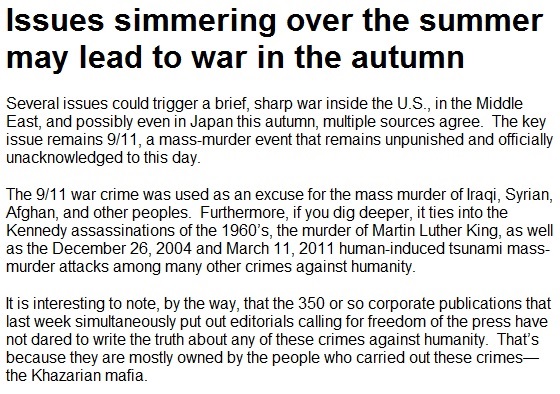 The second message I received on August 23 via „sputniknews”. My Russian colleague, the actual president of the Academy of the Geopolitical Affairs, col. dr Konstantin Sivkov, observed the following:

„The exacerbation of regional conflicts under leadership of western states increases the risk of third World War. An impuls to the military catastrophe may be given by the Kurdish state which appropriated parts of the territory of Iraq and Syria, also by internal conflicts and civil wars in large countries. … Principal warmonges are USA, Israel, NATO and states and monarchies of the Persian Gulf. They might start to demonstrate their strength in case Iran will resume the missile-nuclear program and will come into conflict with its neighbors. … Also the occupation of Arctic, or the desire of the Latin American countries to lose their dependence from USA, may lead to conflicts. In the east, we have a tense situation on the Korean peninsula, a Taiwanese question, and the struggle between Japan and China for disputed territories.”

Both these commentators are silent about the eventual military and political impact of the recent Sino-Russian project of “One Road One Belt” linking China, Russia and Western Europe. At present the major obstacle to its realization form tightly affiliated with USA Poland and Ukraine, this last one on its “one way” road to NATO membership. Due to this, the Russian enclave of Kalingrad at the Baltic Sea, has become the temporary endpoint of the proposed New Silk Road . (The hudge bi-annual NATO “Anaconda” manouvers around this enclave, indicate that in case of its blockade it may become a “hot point” leading to a war on an intercontinental scale; exactly 80 years ago the issue of a “corridor” linking Germany and Dantzig/Gdansk situated close to the present Kaliningrad, furnished a spark which ignited the WW2 )

As this Transeuroasian Road Project is considered, we were informed about it already in 2003 during the World Public Forum Dialogue of Civilizations (WPFDC) at Island of Rhodes. Significantly this meeting was orgainzed jointly by Russian “iron minister” of railways Vladimir Jakunin and by Nicholas F. S. Papanicolaou of Greek origin, a president of an American Titan Capital Corporation, specialized in furnishing concrete necessary for the construction not only railways but also motorways.

The “New Silk Road Project” surely will diminish the previsible catastrophic consequences of eventual American naval blockade of commerce between engaged in this project subjects. But will the One Belt One Road Initiative lead to a more peaceful state of the world? The third major organizer of these WPFDC meetings, was an Indian octogenarian entrepreneur and visionary Jagdish C. Kapur, who argued that “we are now under thralldom of a paradigm of ‘armament protected consumerism’ which among other parameters has also perfected techniques for the moronization of masses, ‘ramboisation’ of governance (…) intellectuals cannot step out of the universities except in support of this paradigm”.

It is worth to notice that this deceased in 2010 Indian visionary repesented the hardly known in the West Hindu (and also Aristotle) way of seeing the Universe in eternally repeated CICLES, bio-processes included (which Cosmic Ciclicity leaves no place for an antropomorphic God Creator). Contrary to it, both Vladimir Jakunin and Nicolas Papanicolau declare thamselves attached to the Christianity, thus accept the G-d of Israel invented / created LINEAR understanding of the Universe history: Jakunin represents interests of the Orthodox Church, in particular of St. Andrew Fundation, of which his wife is a Chairperson; and Papanicolau represents interests of the American Christian Oak Initiative and of an Ecumenical Order (OSJ), of which for a period he was the Grand Master.

I am personally a post-Christian, revolted against the HIDDEN PHILOCRIMINALITY of this religion, the philocriminality modeled on activities of Jerusalem’s Temple, of the sociotechnique of “the redemption of sins” by passing them onto  innocent “god’s lambs”. (This fact I realized only at my age of 40, after reading the Polish Pope encyclical letter “Laborem exercens” in 1981). I tend thus to see the world in a pre-Christian fashion, characterising not only Aristote and J C Kapur, but also other critics of Christianity, be it Celsus in Antiquity and Karl Marx in Modernity.

As our current „times of upheaval” are concerned, I permit myself to recall the prediction of the French physicist, Nobel Prize Winner Frédéric Joliot-Curie. He formulated it exactly 70 years ago, during the World Intellectuals Peace Congress, held in Polish Wroclaw in August 1948. He predicted at that time something like this „The next great war will be INVISIBLE. Citizens of affected countries will hardly notice that their territory is occupied be a foreign army and that all their social and cultural institutions become subverted by agents of an alien empire.”

His words become reality half a century later, at present outposts of US Army cover practically all Europe, up to borders of “abrogated Russia”, Switzerland and Austria still excluded. Why do Americans (hence not only the “Khazarian Mafia”) so desperatedly strive for the TOTAL CONTROL of the Planet Earth?

An answer to this question was given by Armand Cleese, the director of the European Institute of International Affairs in Luxembourg, during our Dialogue of Civilizations Forum at Rhodes in 2003. In his speech “America’s search of a new world order”, he stressed that “United States wants a world without enemies, without threats, without risks. Therefore it is bent upon eliminating all enemies, all threats, all risks. It wants to crush any opposition. It wants a world looking up to the United States, adulating the American model, adhering to its principles and values, obeying its rules. It wants a totally Americanized world, without any diversity, without any dissidence.(…) The quest of the Americans for absolute, total security may lead, may even be bound to lead to absolute, total insecurity”*.

During this 2003 WPFDC meeting, the Russian philosopher Natalia Narochnitskaya added to the above speech her observation that “A characteristic feature of the branch of American ideology that produced atlanticism and its “one word” doctrine (…) is messianism based on providentialist beliefs of the puritains inspired by Old Testament … these perceptions feed the American claims to a leadership in a world where other countries are regarded as provinces with no right to historical initiative.” In light of these two European opinions it is worth to recall Jagdish Kapur statement during the same meeting “we are now under (USA imposed) thralldom of a paradigm of ‘armament protected consumerism’ which among other parameters has also perfected techniques for the moronization of masses and ‘ramboisation’ of governance.”

I had also a speech during this Forum under the title “Globalism – the Project of Flat Earth and of Flat Brain Cortices, but no Dialogue of Civilizations Ahead”. The journal “World Affairs” in Delhi (vol. 7, no 4, 2003) has summarized my contribution in following words “like European conquistadores of the yore, the American neo-conservatives are justifying greed, violence and plunder by quoting the Bible and claiming to fulfil its prophecies”. Later on I developed more in detail this thesis, observing ironically – also during our 2017 Mut zur Ethik conference – that this messianistic ‘thralldom of a paradigm of armament assisted consumerism’ consists of the worship of a Threefacial Artificial Divinity of Technique, of Money, and of an Ass loving Comfort (in abbr. TMA or WTC: Wealth-Technics-Comfort). By studying the Holy Bible, I was even able to point at Fathers Founders of this “childish” Western cult: 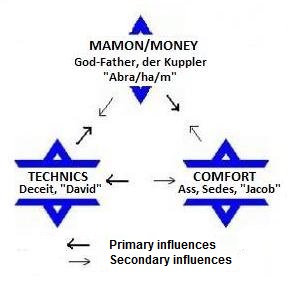 The announced on first pages of the Bible, G-d’s demand “dominate the Earth” – in practice with the help of corrupting the spirit and body MONEY and TECHNIQUE – is at the origin of all OBJECTIVE EVILS of modernity. Not only the excessive urbanizationand and technicization consumes Earth’s natural ressources and thus promotes tensions among competing for these ressources people and nations, but it also contributes to the appearance of terrible vices of societies dwelling constantly in comfortable conditions. The rapid increase at present of the number – of usually hereditary – civilization diseases (in particular of cancer and autism today) is the long term result of not sufficient exercise of our organs, our brains included, “with intellectuals – to complete the J.C. Kapur statement – not daring to step outside of universities and to argue that this is the effect of Lamarckian Laws of Biology, knowledge of which is forgotten at present at our educational institutions”.

Surely, the proposed conjointly by Russia and China New Silk Road Initiative, does not make much difference in realization of this Technique-Money-Asss (TMA in Slavic languages means “darkness”) program of moronization of ever more obese human masses. And the Christianity will not save us from this easily predictable degenerescence**. The “Synagogue of Satan” origin of the philocriminal cult of Christ crucifixion become visibilized in particular in recent ornamentation of renewed churches in Russia: 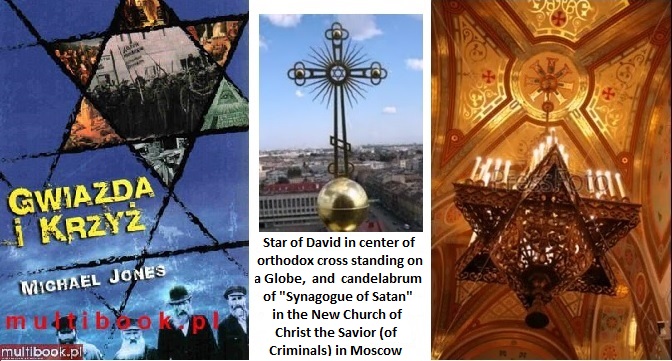 The fact that dumb Christians have helped, through centuries, to impose the despotic rule of „Khazarian Mafia” on practically whole Planet (with the exemption of the „godless” China and of few smaller states like Iran, Cuba and N. Corea), is well known among Jewish intellectuals. The Israeli rabbi Pinchas Polonski was overtly speaking about it in Petersburg Choral Synagogue in 2014. This grown in the Soviet Union rabbi was arguing for a massive proselitism to the represented by him „Synagogue of Satan” – to use Jesus’ of Nazareth term repeated frequently in a book of our colleague, American writer Michael Jones on „Jewish Revolutionary Spirit”; this book in 2007 was translated into Polish under the title “The Star (of David) and the Cross (of Christ) ” – see above the picture of its cover.

From my point of view of a competent Lamarcko-Piagetian philosopher, only by an abandon of the the TMA / WTC paradigm we may hope for the return of Homo sapiens to commands of our overpopulated, overmechanized, oversterilized and overurbanized Planet. And I have to recall that during the last century only Marxists in power were able to suppress succesfully the cancerous overgrowth of Money subjugated modern social systems. That’s all I have to say.

* http://www.brusselstribunal.org/bios/Clesse.htm – this link is inactive at present

** The perversely judaized form of initially very counter mammonist – and thus also neglecting TMA values – Christianity, was invented by cunning Pharisee criminals of Antiquity, to recall the famous Saul from Tarsus alias St. Paul, as well as his mentor “the perfect Jew” rabbi Gamaliel from Jerusalem. The St. Paul’s INFANTILE theology of Salvation – which in practice represents the PHILOCRIMINALITY of faith – attempted to limit, in the the 5th century, the patriarch of Constantinople Nestorius, arguing that Jesus wasn’t God neither at his birth, neither at the cross. Unfortunately his based on ARISTOTELISM argumentation was suppresed by the greedy of power (over proverbially dumb masses) St. Ciril, the leader of a murderous gang of monks from Alexandria (which gang, among other glorious achievements, killed the neoplatonian philosopher Hypatia).