“Sage ich, was gesagt werden muß” (I say, what must be said)

Commenting my “God and Gold: the Temple of Zion Heritage today” report from “Mut zur Ethik” meeting in Switzerland a month ago, Ken Freeland, a principal contributor to the [shamireaders] website, wrote on September 22:

Anyone who reads the Gospel with an open mind cannot help but conclude that Jesus’ initial and primary purpose was to spread the good news that the Kingdom of God (or Kingdom of Heaven) was at hand.  In all his teachings about that Kingdom, in all his parables that made reference to it, there is not a single hint that it required any kind of super-sacrifice to inaugurate it.  He clearly became aware, in the course of time, that his teaching was running afoul of the authorities, but not until the very end are  any words attributed to him indicating that the Kingdom of God required the sacrifice of his life as its entree, only that people hear his teachings and follow them.  I cited earlier his approving citation of Second Isaiah:  “It is mercy I desire, and not sacrifice”. Can such an admonition be uttered by someone who saw his own sacrifice as both beneficial and necessary? Let’s  give Jesus a little credit….

The problem is that the quoted above “desire of mercy and not sacrifice” (Mat. 9; 13) is not convergent with J.-Christ “Last Supper” activity, during which he was preparing apostles for his own voluntary, bloody sacrifice “Drink from it, all of you.  This is my blood of the covenant, which is poured out for many for the forgiveness of sins” (Mat. 26: 26-28 and all other Gospels). It is sufficient to recall these numerous, ugly Prayers in Honor of Christ’s Wounds, Passion, and Death”, to realize that – contrary to Ken Freeland’s conviction – Jesus’ own, conscious self-sacrifice become the “corner stone” of The New Covenant.

This lack of concordance, of well understandable Jesus’ “desire of mercy not sacrifice”, with the final result of his “work” (Labor) at the cross, closely resembles situation which we had in the Catholic Church only quarter of a century ago. In 1987 pope John Paul II wrote the encyclical letter “Solicitudo rei socialis”. This desire of a socialist rule, was totally contradicted by JP2 real achievements: thanks to his “new evangelism”, nearly all traces of socialism in Eastern Europe vanished, the Polish media on September 30 were joyfully announcing that our pope will soon become a saint, this as a gratitude for his labor aimed at the eradication of communism in Eastern Europe: below I pasted a photograph of a mutilated on October 1 statue of president Ronald Reagan, conspiring, in Florida in 1987, with our pope how to destroy the “Empire of Evil”. 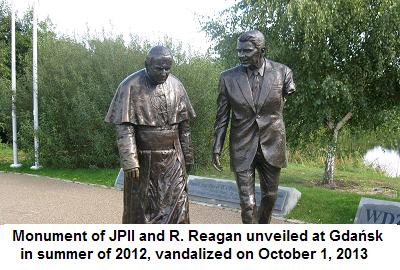 John Paul II during his first travel to still socialist Poland in 1979, loudly expressed, during a mass at Warsaw’s Piłsudski Square, the desire “Let Thy Spirit descend and renew the face of the earth. this earth!” Judging after the number of hypermarkets and banks in my country today, the “Holy Spirit” invoked by pope was the Spirit of God-Mammon, the practical god of Jews, which become “the god of the world”, as Karl Marx remarked it already in 1843 in “Zur Judefrage”.

Is the Spirit of Mammon saturating the New Testament, too?

Ken F. wrote “Jesus’ initial and primary purpose was to spread the good news that the Kingdom of God (or Kingdom of Heaven) was at hand”. According to Jesus quoted in gospel of Matthew – which gospel was prepared for Christianized Jews – this Kingdom will belong to these “poor in spirit” (Mat. 5: 3) and to “these which make themselves eunuchs for the Kingdom of Heaven” (Mat. 19: 12). These short remarks suggest that such “kingdom of god”, proposed only to Jews and their imitators, is situated at antipodes of Hellenic ideals of a strive for the Beauty, for the Truth, and thus automatically for the Good. The sinister case of the numerous sect of Skoptsy in modern Russia is an example of such, inspired by teachings of Jesus the Savior, collective anti-erotic, anti-sexual aberration. (The thwarted by the Soviet Revolution, self-castrated skoptsy specialized in money-lending, thus their occupations were not too different from these of industrious, sedentary Jewish bankers. ) 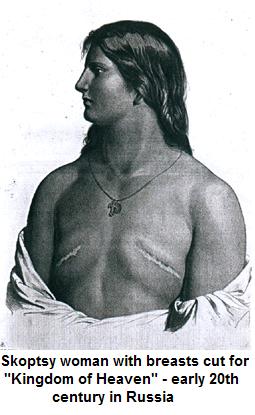 Let’s return to KF quoting Jesus: “It is mercy I desire, and not sacrifice”. In fact it still exists a “globalist” religion, according to which “Christ Jesus the son of Mary, the Messenger of Allah, wasn’t killed, nor crucified, (…) Nay, Allah (the Merciful) raised him up unto Himself”  (Qu’ran surah IV, v. 157-158). According to historians of Islam “Mohammad has learned particular pseudo-Christian doctrines, which claimed that Jesus Christ was not crucified in his own person”. Such belief was widespread in particular among Nestorians, frequently using the Г-cross (swastika) as a sign of a victory of life over death.  Nestorians refused to accept, the imposed by consecutive “Robber Councils of Ephesus” in fifth century, dogma that Jesus was God, and thus that  “Christ’s Wounds, Passion, and Death” had an everlasting salutary meaning.

It is thanks to dubious intellectual achievements of these greedy for power bishops, the contained in the Old Testament,  recipe for moral “cleansing” of crimes committed by Mosaic “robbers in law”, become accepted by the Church: “He (Christ) was wounded for our transgressions, He was bruised for our iniquities; And by His stripes we are healed” (Isaiah 53: 5). Since these Councils, centers of Christian authority and in particular the Holy See, have turned into “dens of self-satisfied robbers”, forming sublimated versions of the antique Temple of Zion robber activity, despised by Jesus from Nazareth. (See “Kriminalgeschichte des Christentums” of Karlheinz Deschner on this topics – this book has not been yet translated into English.) But this is not the worse. In late Western Christianity, the Labor of Christ “emptying” himself from the life at the cross, become a model imitated by “Americanized”, ever more automated in their behavior humans. These “humanoids”, thanks to technical inventions, are becoming ever more engaged in the project of a total sterilization of the Planet Earth. 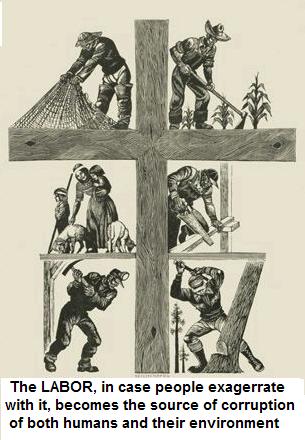 Already a half a century ago, an American historian of science and of religion Lynn White, in a remarkable article “Historical Roots of our Ecological Crisis”, wrote “Modern Western science was cast in a matrix of Christian theology ………Somewhat over a century ago science and technology – hitherto quite separate activities – joined to give mankind powers which, to judge by many of the ecologic effects, are out of control. If so, Christianity bears a huge burden of guilt.” From my part I have to recall that already at the end of 17 century, the Polish noble and initially member of the Jesuit Order, than soldier, judge and philosopher Kazimierz Łyszczyński has dared to look “from above” at the origin of Judeo-Christianity, a religion which is completely pathological in its biological essence. Lyszczynski was decapitated in 1689, but acts of his trial are preserved. We find in them such trivial statements from his, written in secrecy, book “De non existentia Dei”:

I – we beseech you, o’ theologians, by your God, if in this manner do you not extinguish the light of Reason, do you not oust the sun from this world, do you not pull down your God from the sky, when attributing him the impossible, the characteristics and attributes contradicting themselves.

II – the Man is a creator of God, and God is a concept and creation of a Man. Hence the people are architects and engineers of God and God is not a true being, but a being existing only within mind, being chimeric by its nature, because a God and a chimera are the same.

III – Religion was constituted by people without religion, so they could be worshipped although the God is not existent. Piety was introduced by the unpietic. The fear of God was spread by the unafraid so that the people were afraid of them in the end. Devotion named godly is a design of Man. Doctrine, be it logical or philosophical, bragging to be teaching the truth of God, is false, and on the contrary, the one condemned as false, is the very true one.

IV – simple folk are cheated by the more cunning with the fabrication of God for their own oppression; whereas the same oppression is shielded by the folk in a way, that if the wise attempted to free them by the truth, they would be quelled by the very people. (etc.)

For putting on a paper remarks like these, Lyszczynski was condemned, as legirupa, impudens, impurus, inverecundissimus by Polish Sejm Tribunal for a death more cruel than the one of Christ at the Cross. Bishop Załuski gave the following account of the execution:

After recantation the culprit was conducted to the scaffold, where the executioner tore with a burning iron the tongue and the mouth, with which he had been cruel against God; after which his hands, the instruments of the abominable production, were burnt at a slow fire, the sacrilegious paper was thrown into the flames; finally himself, that monster of his century, this deicide (after decapitation) was thrown into the expiatory flames; expiatory if such a crime may be atoned for.

Of course, bishops, gathered during this religious spectacle at the market of Old Town of Warsaw, were murmuring with delight words of Isaiah’s prophecy: “He was wounded for our transgressions, he was bruised for our iniquities; And by his stripes we are healed.” 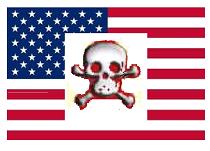