Was the Odessa mass murder on May 2-nd the “funding sacrifice” of New Zionist Ukraine?

Was the Odessa mass murder on May 2-nd the “funding sacrifice” of New Zionist Ukraine?

An interview realized by Radio SvobodnyVysielac (Free Broadcaster) from a small city of BanskaBystrica in Slovakia (EU). Dr. Roberts is interviewed by Norbert Lichtner. Historically, this radio station appeared on the air when Slovakia was being oppressed by foreign powers (Germans 1944, Soviets 1968). Consistent with this history, the station reappeared in 2013 in response to US/EU imperialism.

This interview was realized on March 13, 2014 and it begins in English language in 2.30 minute (out of 45 minutes in total). Dr Roberts begins it with a statement „Everything in Ukraine was created by USA government“ and continues saying that „USA is pushing the world towards the world war“. Moreover  „Europe – principally by acceptation by Germany of ‚sanctions‘ against Russia, demanded by USA – is enabling Washington to push the world towards the war, a nuclear war … They do not want to start the war right now, but once they install ballistic missiles in Ukraine and Georgia …“

And the most important „Washington is in hands of insane maniacs, how many countries they destroyed in last  years! … „American publics has no sources of information“. … We are in American puppet state. Everything what Washington says is a lie. … The exists no more journalists but only propagandists, ‘presstitutes‘ … Independent US media ceased to exist during the Clinton regime, five big corporations control all media market and in turn they are entirely controlled by the „ministry of propaganda“ in Washington. Everything is under the control of Washington, in USA as well as in Europe. … America is a special country, like Hitlerian Germany 80 years ago, America does not have to obey the law because it is above the law.

They (Americans) will try to cut off China from energy resources, like they did it with Japan in 1940-ies. If you are careless about Americans, they will construct Fifth Columns inside your country. … And there is no opposition inside USA against this politics. … George Soros is not running the show now, everything is run by the State Department, also Western Europe, in particular Germany, will not act against the will of this State Department run by neocons. The only method to stop the future war are millions which will go onto streets, but this is not possible to realize. … The present Chief of staff of USA claims that they have an agreement with Ukraine, dating from 1992, which agreement permits the entry of American troops into this country in case of a necessity…

It is a really powerful interview, and it is confirming the fact that at present we witness the GLOBAL WAR ON TRUTH conducted by the Bible inspired Chosen People of all nations and races (see the opinion on this essential topic of a former top rank Soviet military commander, general Konstantin Pietrovhttp://www.youtube.com/watch?v=OyW-dHfxZn0;  initially Jews were predominantly ofblackrace, as testify it Hindurecords from the time of Nebuchadnezzar, when the first wave of Jewish refugees arrived to India).

In particular to these self-appointed, Holy Bible inspired „choosenites“ belong Ukrainian nationalists of the Banderist type, preserved in a “mind freezer” of USA and Canada through the second half of 20th century. Their „ultra occidental“ ideology, elaborated in Poland prior to 2WW by doctor of law from LvivDymytroDoncov,is asuperposition of Darwinian beliefs in a „survival of these most aggressive in a struggle for life”, combined with Nietzchean „Will to Power“ (to make a shit, like this “Maidan” in the center of Kiev in last months), and with the emanating from the Holy Bible conviction that (Super)Man’s role is to „dominate the earth and Everything which moves upon it”.2.     Was the Odessa slaughter on Mai 2nd the funding“burn sacrifice” of a consecutive New Israel to be erected at Ukraine’s territory?

Paul Craig Roberts argues that „Everything in Ukraine was created by USA government”. In particular the putchist government, which sized power in Kiev on February 22 is an entirely American Creation: its head, the fulfilling the duties of President, OleksandrTurchinov is a pastor of Baptist Church and has several times travelled to USA to get a “religious” instruction. A similar “religious” background has the present Prime Minister ArsenYatzeniuk, who is a high grade Scientologist Mammon Church official, having a sister permanently living in USA. And the present head of National Security and Defence Council AnderiPorubij (in Ukrainian ‘chop man’ also in a sense of ‘henchman’) overtly acknowledges that he follows “Hitlerite National-Socialistopenly revolutionary ultranationalism, its demands for the violent takeover of power in the country, and its willingness to blame Russia for all of Ukraine’s ills.“

According to sources inside Ukrainian Internal Security Services (SBU), the whole fourth floor of SBU headquarter in Kiev is occupied today by CIA, controlling from „above“ all major sociopolitical events in this, aggressivelycolonized by USA,country. To this hardly revealed news, we shall ad an information from Jewish „red baron“ Edward Hodos from Charkiv, who participated, in 1991, in Chabad Lubawitch headquarters at Brooklyn, NY in elaboration of plans of „privatization“ of the deacaying Soviet Union. Namely the sect-mafia Chabad Lubawitch – to which belong several Ukrainian billionaires like Ihor Kolomoiski and Petro Poroshenko –made a plan to transform Ukraineinto a subsequent New Israel for escaping from Palestine Jews.

In case of creation of a “New Nation”,  an appropriate “funding sacrifice” is recommended, the best in a form of human fulburning (holocaust),prescribed in texts of the Bible. The murderous fire at Odessa House of Labor Unions made in my mind, specialized in studies of religious rituals, an association with such odious, “nation building ceremony”, transmitted worldwide by TV media. I wrote about this association at WPS website already on May 3-rd, and soon a similar association appeared also at other websites (see “Obserwatorpolityczny” of May 4-th).

In following days more information about the Odessa fire was revealed. In particular the number of victims seems to be much higher (over 120) than the number officially admitted (53), and that that this specific fire (‘holocaust’)  was not accidental, but a carefully prepared, by Ukrainian Authorities, event. From Russian Vesti TV I learned that the Chief of Ukrainian security forces Andrei Parubij was in Odessa at the time of this “funding holocaust” (Parubij, as a commander of Maidan during the time of mortal shooting in Kiev in February 2014, was in control of all arms there, including arms which used killers, hired probably in Poland); on films present in the net we can see that Odessa police collaborated with the organized, super-aggressive mob; soon after the firewas extinguished it was revealed that inside the House of Labor Unions was prepared a trap for trying to hide in it “pro-federation activists”escaping frominflamed tentsat Kulikovo Pole square;it is even possible to see how jumping from windows of this “trap” people areshot down by known to public henchmen (‘sotnikMykola’) placed outside the building; and so on.

If one has strong nerves, and DARES TO WATCH HOW THE CENTRAL INTELLIGENCE OF AMERICA (the “God named CIA”) WORKS, you are invited to look at pictures collected below, the translationof explanations into English was done by my colleague Piotr Bein from Vancouver, Canada: 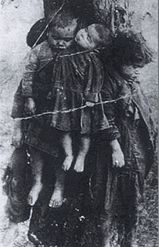 (Glory to Ukraine! Glory to Nation! – these were last words which heard tenths of thousands of Poles of Wolynia and Galicia in years 1943-44, massacred by Ukrainian Nationalists. These Murderous habits of Ukrainian “choosenites” fully resurrected today: 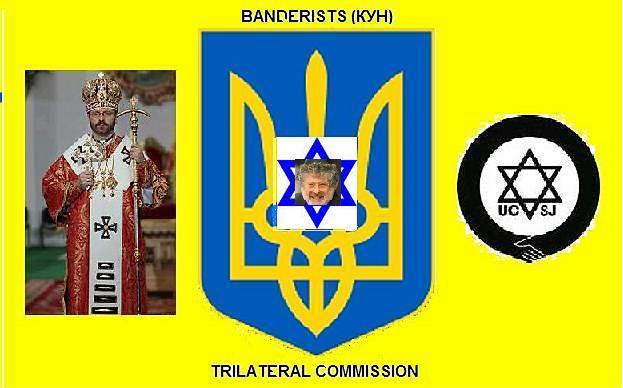 Above I pasted, once again, my © artistic vision of four powerfullyLIE LOADED, the mass murder of “Russians” preparing organizations, all of them closely collaborating with the CIA and the US State Department. Would it be possible to break down these “4 Dents of Ukrainian Trident” pushing the world towards the HYPER WAR soon?

The pictured above, stylized on svastika virtuti militari cross with an eagle inside, was the symbol of 4th Regiment of Strzelcy Podhalańscy (alpine gunners), which was formed in France in 1919 as a part of Haller’s Army. It took part in war against Nazi Germany, and was defeated near the San river on September 16, 1939. Its POW were transpred by Germans to the Western Ukrainian village of Urycz, where on September 22 1922 soldiers of Ukrainian origin were separated, and the rest – from 73 to 100 soldiers – were burned alive, locked in a barn.This crime against Genvva Convention on POW was done aleggedly by unknown German soldiers (commaded by a sergent?) with help of Ukrainian nationalists. It was perhaps the first case when Ukrainians fighting under the Tryzub emblem committed this „fulburn sacrifice“ to their National God of Goodness. (Later on Ukrainian nationalists repeated many times such characteristic of „worshippers of Jahveh“ behavior: on March 22, 1943, the entire population of the village Khatyn was massacred (burned alive) by the 118th Schutzmannschaft Nazi battalion made up mostly of Ukrainian nationalists; in April 1943 UPA killed (predominantly burned alive) about  600 Polish families during the Janow Massacre, and so on, until Odessa mass murder this May2nd. I am afraid the it is not the end of „Slava Ukrainie! Glory to heroes!“ achievements of Judeo-Banderist revolutionary movement, ressurrected by US psyops professionals. 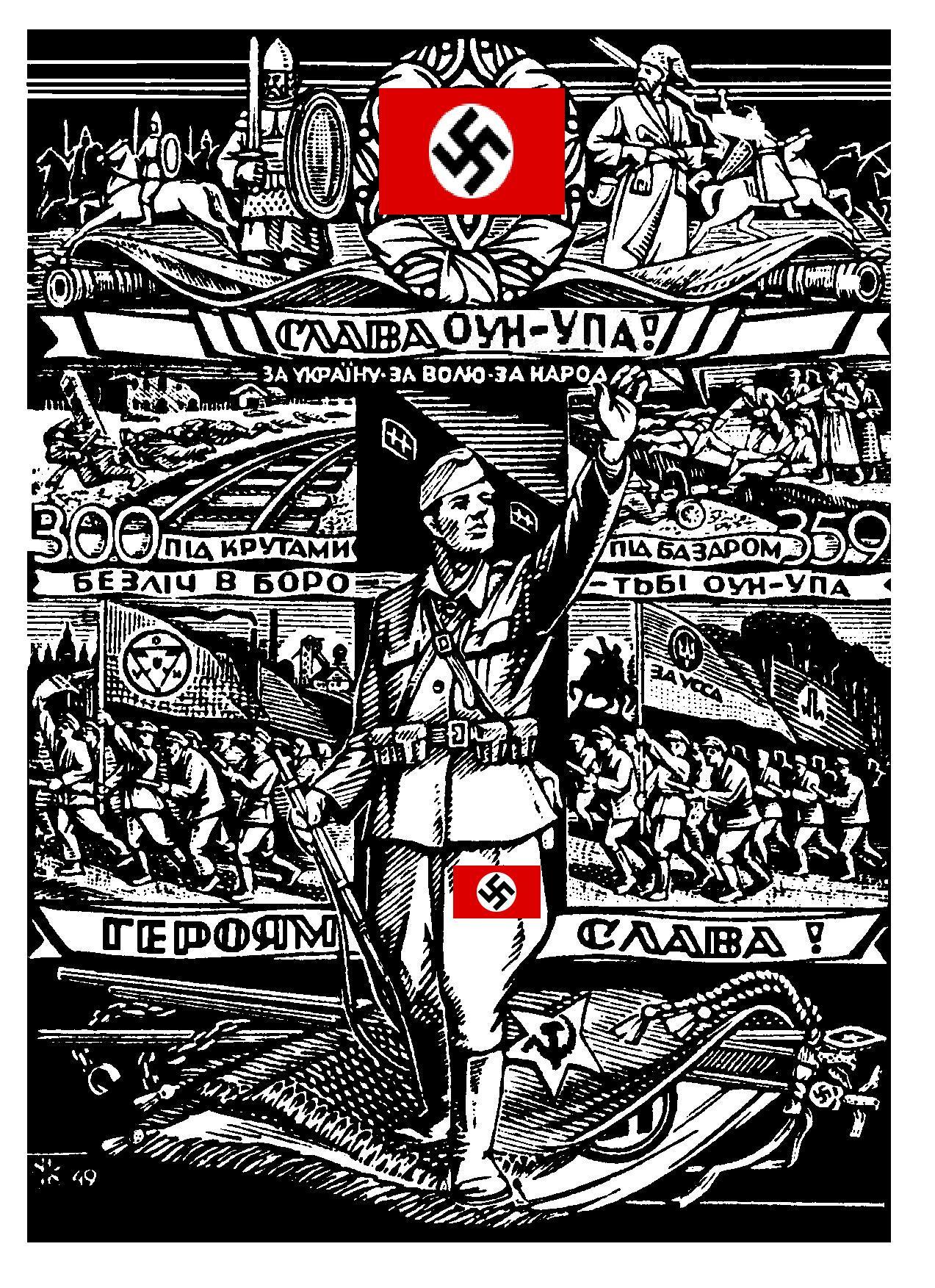 It is interesting that on the picture above, the sign of Tryzub (Trident) was ARTIFICIALLY COVERED by the German Nazi flag with svastika in its center. At this picture we can see that the antique svastika, as well as modern  sign of Soviet communists, were put on items under legs of victoriousy marching Ukrainian hero!

In a deeper reality this propagandist poster should look like this: 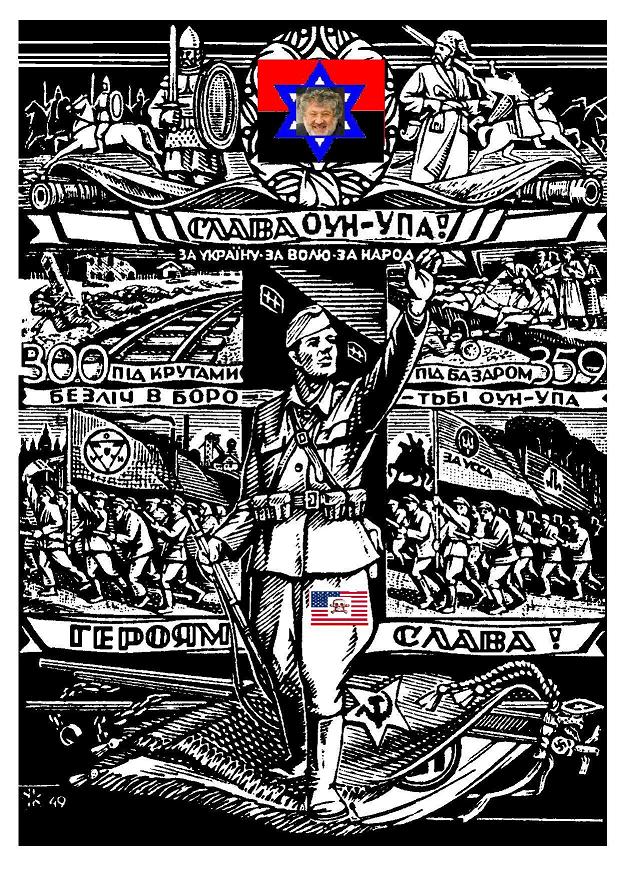 This entry was posted in ENGLISH TEXTS, politics of globalism. Bookmark the permalink.