THE „ABRAHAMIC ALLIANCE” FOR RE-CONQUEST OF LYBIA

Is there is No God but only GoG?

THE „ABRAHAMIC TRIAD ALLIANCE” FOR THE SPOLIAGE OF BLACK CONTINENT 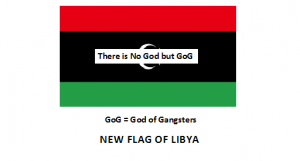 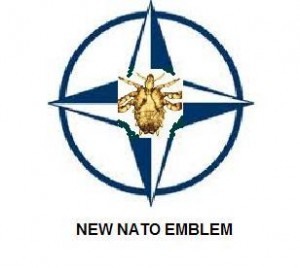 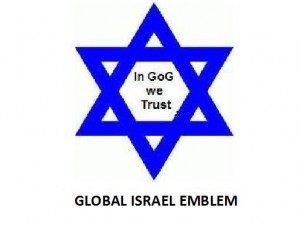 Eight years ago I visited ruins of an antique city Dion in Greek Macedonia, at foothills of Mt. Olympus. There are preserved remnants of 26 meters long stone table, at which Alexander the Great made a sacrifice of hecatomb of oxen, prior to the beginning of his multiple wars “in four directions of compass” (thus like do it NATO of today). Is it possible that the antique ritual of bloody offerings, prior to an important military (or commercial) venture, is still practiced in our hyper-technicized, postmodern world? At the first glimpse it looks absurd, but already 17 years ago, during a conference held in brand new Center of Jewish Culture in my old Kraków (Cracow), the internationally known hero of WW2, Marek Edelman had publicly assured us that this indeed is the case.

According to this influential Jewish intellectual, Germans during the WW2 wanted to exterminate Jews, “for they wanted to make from their spilled blood the fundament of their Great Reich, for always when one wants to built a great empire, such ritual is necessary”. Marek Edelman was partly in error, for the murderous persecution of Jews began only in January 1942, thus at the moment Hitler’s Reich was already in a full expansion, and only the American involvement in war in Europe resulted in massive dislocations of Jews, which were outspoken, especially these living in USA, enemies of German nationalism. According to the opinion of French communist philosopher Roger Garaudy, the overpublicized holocaust of Central European Jews in years 1942-44 become indeed the fundament of a future Empire. But not of the “Thousand Years German Reich”, but of Modern Israel, which Askenazi (it means “German”) Jews from Poland, acting under leadership of Menachem Begin, began to built, once they were sure that WW2 will be victorious for Allies.

The same Marek Edelman – who in February 1999 personally convinced president Bill Clinton to start the bombing campaign in Jugoslavia “to save Albanian civil population in Kosovo from Serbian Army atrocities” – in July 1999, only few days after the end of this lasting for 3 months “friendly bombing” of Serbia, assured the Pope John Paul II that “Kosovo (expurgated by NATO from its Serb population) will be the ovary of New Europe”. (He did this in the official welcome speech to Pope during his visit to Umschlagplatz in Warsaw’s old ghetto.) These two statements of  Edelman (a “noble man” in English) are good confirmation that Jewish “Intellectuals in power”, like their biblical forerunners, still consider the collective murder – or other form of harm done – to selected by them decent and valiant people, as an efficient, and psychologically necessary, “empire building” activity.

This ugly, evidently criminal, method of initiation of world conquests is exalted in both Old and New Testaments. Biblical “recipes for success of Nation Building” are so precise, that when I learned that during events 9-11-2001, in aerial attacks in USA, were killed approximately three thousand of Americans, I immediately associated this number with “three thousand brothers and sons”, killed by Moses and his clan of Levies, just prior to the reception, by Moses, of Stone Tablets with Law “you shall not kill”. And in fact, geopolitical events which followed both these “offerings to LORD” turned indeed to be similar: Moses and his gang, after making, under Mount Sinai, their famous “Covenant with god”, began the lasting for several decades conquest of Promised Land; Rulers of America, after their “covenant with GoG” on 9-11-2001, began the Global Wars in all four directions of NATO compass. (Also human scapegoats, sacrificed in both Covenants, had similar character: Moses’ gang slaughtered, under mount Sinai, their own “brothers and sons”, which celebrated the virility of Egyptian, coated with gold, bull-like god Apis. Being attached to the cult of this “animal” deity, they had no intention to rob and exterminate other nations, acting on the moral basis of the “god given” Decalogue. Also killed during “9-11-2001 sacrifice”, simple maintenance and guard workers, which were cleaning the WTC prior to its opening at 9.30 am, had no ambitions of world domination – which godly ambition surely had, absent in WTC at this early hour, moguls of finance of the type of Larry Silverstein, the owner of this characteristic Twin Symbol of “Golden Calf” cult in this prestigious New York’s Business Center.)

Seen in this Edelsman’s perspective, enlarged by the lecture of the Holy Bible, also the recent lynching, of nearly 70 years old Muammar Kaddafi, has its religious dimension, important for godly purpose of Chosen People Acts. In still smoldering ruins of his birthplace Syrta (proposed by Kaddafi to be the Capital of United Africa), was achieved THE NEW, POSTMODERNIST COVENANT WITH GOD YHWH, opening the way to re-colonization of Black Continent by GoG’s Choosen. Who are those “Chosen” which collectively murdered colonel Kaddafi and his Jamahurydyia, Republic of Masses?

1. As I wrote it earlier, the order to Wound and than to Kill “The Green Lion of Africa” was given by “troika” of Judeo-Americano-French “Lawyers and Scribes” (Henri-Lévy, Sarkozy, Clinton), with the US secretary of State Hillary Clinton  playing the role of “shekina“, which gave the final order for Kaddafi execution, this during her October 18th visit to Tripolis.

2. The HEAVENLY – it means coming from sky – EXECUTORS of order of this “(female) God’s Presence” were (post)Christian French “white collar” pilots, which names are easily to be find in NATO registers.

3. And The DIRTY JOB of ACHIEVERS was done by zealous Islamists from all over the world, theoretically marching under the Mohammed’s banner “There is no God, but Allah”. Of course under the term ‘Allah’ CIA/MI6 agents, secretly hiring these “pious Islamist” services, understood Money as usual, in every serious business.

It means that in Libya, for more than seven months, we had truly ecumenical Alliance of Three Abra/ha/mic Religions, trying to eradicate the “godless”, socialist heresy of attempting at the greening of Sahara desert, Kaddafi’s “Republic of masses”. There are of course close resemblances of these disgusting scenes of lynching of Kaddafi, filmed at Syrta on October 20th, to extremely cruel scenes of “Passion of the Christ” in Mel Gibson’s film realized few years ago. Please compare amateurish pictures, of covered with blood face of Kaddafi, with professional (film) shots made by Mel Gibson cameraman:

The Christian religion, which cognitive basis was established by a trained in rabbi Gamaliel yeshiva “lawyer and scribe” Saul from Tarsus – later on known as St. Paul –  has made an ample use of all these ugly wounds, allegedly inflicted to Jesus of Nazareth during his execution at Golgotha. In particular Catholic Crusaders were spreading their “message from God” under banners representing “five wounds of Christ”. And what was their Holy Message to pagans, also to these dwelling on territories of the present Poland? In Old Testament the term “god in house” meant “the death of firstborn sons, the fire, the destruction of household”, and indeed this “message from GoG” (GoG = God of Old Testament) was also the message of Christian military missionaries.  Below I posted a short film from Syrta, just prior to Kaddafi execution, demonstrating how “New NATO Crusaders”, in a truly wicked manner destroyed this “would be Capital” of Africa, with the use of (forbidden by international conventions) cassette bombs, wounding and killing in particular civilians, which NATO has obliged itself to protect:

Is There No God, but Only the Almighty GoG (i.e. Mammon)?

Is this only a rhetoric question? Below I posted a film released in Russia on Oct. 19, just a day before Kaddafi’s execution. It is titled “The truth about war in Libya”:

It ends with a scientific statement followed  by an essential, non-rhetoric question: “It is evident that on the Earth we have two genetically different types of humanity. WHICH ONE DO YOU CHOOSE?”

Not everyone believes that Muammar Kaddafi was lynched and than shot to death few days ago. Like in the case of Jesus of Nazareth, which according to Moslems disappeared “taken away, from Jerusalem’s Getsemani Garden by 3 angels sent by Allah to save him”, several close collaborators of the “King of Africa” still believe that he is alive – which belief reinforces the Global media information that today he was buried in a totally obscure place. At several blogs we may read the message of “Kaddafi’s brother”, who repeats words of the Leader, transmitted by Libyan radio on May 17th, after Kaddafi’s prolonged absence in media after the NATO attack of May 1st, during which were killed his youngest son and three of his grandchildren.

Muammar Kaddafi than told his followers, more than five months ago: “Thank you for all who wants to know how I am and ask about me. I am fine and live somewhere no one can find me. I live in every one’s heart. If you kill my body you can’t kill my soul which lives in every Libyan. The long life for the martyr and the bad life for all who betray their country.” This is the still valid message to the “Holy Abra/ha/mic Alliance”, which is trying to eradicate vestiges of homo sapiens presence in the Projected New American Century.

This entry was posted in ENGLISH TEXTS, politics of globalism. Bookmark the permalink.